Welcome back friends, we have more games, more DLC, and now some tips for playing. No matter how you play, make sure your wireless gaming mouse is fully charged, controller 2 is at hand if someone wants to get in a round, and your phone is nearby to... 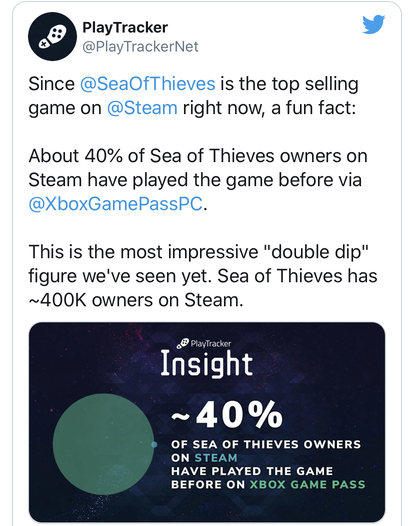 Is MS counter to Sony's Timed Exclusives going to be getting games on Game...

inspired by Grubb's tweet We know Sony has been making Timed Exclusive deals with big 3rd Party (Bethesda and SE) MS hasn't been able to get a huge 3rd Party on Day 1 but they did get some big names within a couple of months from their original...

Boy. I just wrote an essay on another thread about this very thing. But, I don’t believe in thread linking, so I’ll try to edit it down here

The question as posed is whether Day 1 GP is a „counter“ to Timed Exclusives (TE, from here). This implies that we’re talking from the perspective of the platform holder: MS. I think conventional wisdom suggests that TE is better for the platform than GP would be. I don’t know if I agree with that.

What does TE accomplish for the platform? They get the privilege of spending a ton of money… in order to spend a bunch of money promoting someone else’s game because now it’s „one of ours“. That’s especially true for big AAAs. It may help as the faithful will jump in on those sales and buying it because of the brand association, but that’s a nebulous proposition. Other than that, you’re doing free marketing for someone else’s game! Their sales may help a bit, sure, but you don’t even see a dime of it, if it’s a physical sale! And remember - sales because of Sony’s marketing aren’t a benefit of the TE, but rather of the marketing itself that Sony pays for (or at least promotes).

I mean, are timed exclusivity deals supposed to make back their money? Or are they purely cash hole investments into the brand as a whole? And… is that investment in the brand meaningful long term…? I’m not so convinced. „Sony’s real good at taking away games from Xbox!“ Or charitably, „they make deals for good games!“. K.

A Game Pass deal is also paying for the privilege of spending money to advertise someone else’s game - but it’s cheaper AND you also get to advertise your subscription service in the same breath. MS gets to use a third party game to elevate Game Pass - and any conversions there is 100% money straight into the hands of MS.

Day 1 GP also makes AAA games „attainable“ for millions who, as a rule, don’t pay $60 (or full price, in general). That means play time and player counts go up. That elevates the discourse and the excitement around the game in a way that a timed exclusive does not always. I mean… can you imagine how huge it would be to get the next Ubi AAA or the next FIFA on GP day 1? Shockwaves. Huge free earned marketing. That means lots of people hearing about and thinking twice about a game they may never have considered otherwise. And we’ve seen that increase sales in many cases. I point to the success of launching Rocket League on PS+. Did that hurt sales? I think not. It may not have reached such great heights, had it just been a timed exclusive.

And, of course, it rewards the faithful who are already subbed for 3 years. For no additional cost to them, it keeps your super fans engaged in the platform and ready to champion its value. It’s people mentioning Xbox in casual conversation and in media. It’s people making Xbox a part of their everyday routine. THESE PEOPLE do more to elevate the quality and strength of the brand than any timed exclusivity deal ever could.

Timed Exclusivity has its uses for a platform holder. It is a play to strengthen the brand. It may increase sales. It forges relationships with publishers. It is a nod to the fans. But I think Day 1 GP could potentially do it better on every count, especially if a GP day 1 deal is cheaper than TE deal.

Thanks for attending my TED talk.